Clemence Poesy is a French actress and fashion model. She is best known for her roles as Fleur Delacour in the Harry Potter film series, Chloë in In Bruges, Rana in 127 Hours, Natasha Rostova in War and Peace, and the lead role as Elise Wassermann in the 24-episode series The Tunnel. She played Chuck Bass’s new French girlfriend, Eva, in the fourth season of the CW teen drama series Gossip Girl. Her theater credits include Le dragon, Picasso 970, Tartuffe, and Cyrano de Bergerac. As a model, Poésy has been featured in numerous magazines, including the covers of i-D, on French magazine Jalouse twice, on Australia’s Yen, and on Nylon. Since October 2007, Poésy has been one of three spokesmodels for the self-titled fragrance by Chloé, and has modelled in Gap’s 2008 autumn advertising campaign. 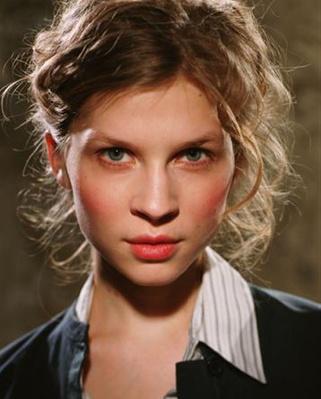 Born Clémence Guichard on October 30, 1982 in L’Haÿ-les-Roses, France, to parents Danièle Poésy and Étienne Guichard, she took her mother’s maiden name, Poésy, as her stage name. She has a younger sister named Maëlle Poesy-Guichard. Poesy received her first acting job from her father when she was fourteen. She divides her time between homes in Paris and London.

Clemence Poesy Education:
She attended an alternative school for most of her education, but spent her last year at L’École alsacienne.
Conservatoire National Supérieur d’Art Dramatique (CNSAD)
Paris Nanterre University

Clemence Poesy Facts:
*She was born on October 30, 1982 in L’Haÿ-les-Roses, France.
*She got into acting because her father is a theatre director and actor.
*She had her first English speaking role in BBC mini-series Gunpowder, Treason & Plot (2004).
*She was chosen as the face of G-Star Raw in December 2011.
*She became the poster girl for the Love Story fragrance from Chloé in 2014.
*She is fluent in French and English, and a bit of Italian and Spanish.
*In 2016, she gave birth to a son, Liam. In 2019, while filming Tenet, she was pregnant with her second child.
*Follow her on Twitter and Instagram.