Colleen Clinkenbeard is an American voice actress, ADR director and script writer at Funimation. She provides voices for English language versions of Japanese anime series and video games. She is known for the voice of Monkey D. Luffy in One Piece, Éclair in Kiddy Grade, Riza Hawkeye in Fullmetal Alchemist, Erza Scarlet in Fairy Tail, Rachel Moore in Case Closed, Gohan in Dragon Ball Z Kai and Yūko Ichihara in xxxHolic. Born Colleen Smith Clinkenbeard on April 13, 1980 in Shreveport, Louisiana, USA, her sister Bonny is an ADR script writer at Funimation. She made her voice acting debut in Kiddy Grade, playing Éclair. She is married to voice actor, Patric Carroll with whom she has one son, Rhodes. 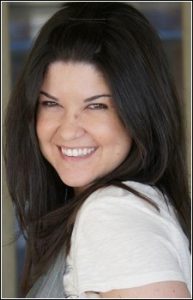 Colleen Clinkenbeard Facts:
*She was born on April 13, 1980 in Shreveport, Louisiana, USA.
*Her sister, Bonny Clinkenbeard, is a script writer.
*She made her voice acting debut in 2004 in Kiddy Grade, playing Éclair.
*On November 10, 2012, she married voice actor Patric Carroll.
*Follow her on Twitter and Facebook.