Kirk Norcross is a British television personality, known for being a cast member of the ITVBe reality television series The Only Way Is Essex. He competed in the ninth series of Celebrity Big Brother in 2012. He also appeared in an advertising campaign with friend Jodie Marsh in 2012. Kirk released his autobiography Essex Boy in April 2013. Born Kirk John Norcross on April 21, 1988 Woodford, London, United Kingdom, to Julie Lloyd and Mick Norcross, he was raised by his single mother with his brother, Daniel Norcross. He had a brief relationship in 2012 with aspiring Jodie Marsh and took part in a photo shoot with her to promote her new nutritional supplements range. In 2016, he began dating model Danielle Louise Carr with whom he has a son, Harry. 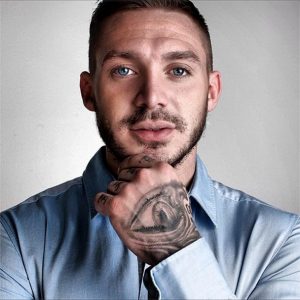 Kirk Norcross Facts:
*He was born on April 21, 1988 Woodford, London, United Kingdom.
*He became noticed as one of the cast members in the British ITVBe (formerly ITV2) reality TV series, The Only Way Is Essex.
*He is also a nightclub promoter for Sugar Hut in Brentwood, Essex, England.
*His lovers have included p*rn actresses Gemma Massey and Brooklyn Blue.
*He has a pet dog named Sinatra.
*Follow him on Twitter, Facebook and Instagram.