Irish mixed martial artist, boxer and businessperson who is the former UFC Featherweight Champion and UFC Lightweight Champion. McGregor is the biggest pay-per-view (PPV) draw in MMA history, having headlined five out of the six highest-selling UFC pay-per-view events. 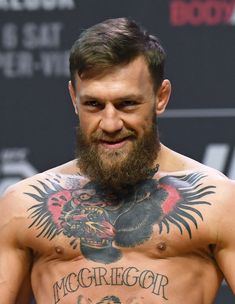 Born Conor Anthony McGregor on July 14, 1988 in Dublin, Ireland, to parents Tony and Margaret McGregor, he was raised in Crumlin, and attended Irish-language schools – the Gaelscoil Scoil Mológa, in Harold’s Cross, at primary level, and Gaelcholáiste Coláiste de hÍde in Tallaght at secondary level, where he also developed his passion for sport, playing football. He made his professional debut in 2008, and won his first two bouts by way of TKO. He has been in a long term relationship with Dee Devlin since 2008. They have two children together.

Conor McGregor Facts:
*He was born on July 14, 1988 in Dublin, Ireland.
*He played football for Lourdes Celtic Football Club in his youth.
*He started his professional mixed martial arts (MMA) career in 2008 after leaving his job as a plumber.
*He became the UFC Featherweight Champion in December 2015 after knocking out Jose Aldo in 13 seconds, setting the record for the fastest championship victory in the history of the Ultimate Fighting Championship (UFC).
*In 2016, McGregor became the first UFC double champion after beating Eddie Alvarez in the lightweight division.
*He began his boxing career in 2017.
*He was defeated by Floyd Mayweather Jr. in his debut professional boxing match.
*In 2018, McGregor founded Irish whiskey distiller Proper No. Twelve, and the brand is now available in Ireland, Australia, Canada, Russia and the U.S.
*He cites Muhammad Ali and Bruce Lee as his biggest influences.
*He holds a brown belt in Brazilian Jiu Jitsu.
*Follow him on Twitter, YouTube, Facebook and Instagram.