Emma Mackey is an Anglo-French actress. She is best known for her portrayal of Maeve Wiley in the Netflix comedy-drama series Sex Education, for which she received a nomination for the BAFTA TV Award for Best Female Comedy Performance in 2021. Mackey has also appeared in Badger Lane, Summit Fever, and The Winter Lake. 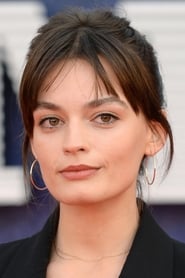 Born Emma Margaret Marie Tachard-Mackey on January 4, 1996 in Le Mans, France, to parents Rachel and Philippe Mackey, her father is French and her mother is British. Mackey graduated from the University of Leeds in 2016. Currently, she resides in London.

Emma Mackey Facts:
*She was born on January 4, 1996 in Le Mans, France, to a British mother and a French father.
*She grew up in Sablé-sur-Sarthe.
*She studied theatre at Leeds University.
*She earned her French Baccalaureate degree from l’académie de Nantes in 2013.
*In 2019, she began starring in the Netflix comedy series Sex Education.
*She currently resides in London.
*Follow her on Twitter, Facebook and Instagram.