Corey Sevier is a Canadian actor. He is best known for his roles as Gabriel McKay in the Fox television series North Shore, and Timmy Cabot on the 1990s version of Lassie. He played Hart Greyson in the 2002 Canadian television series 2030 CE. His notable film credits include Surf School, Decoys 2: Alien Seduction, Awaken, Conduct Unbecoming, House of Fears, The Lost Future, Apartment 1303 3D, and the 2018 film The Northlander. For his work on Lassie, he was nominated for a Gemini Award in 1999. Born Corey Daniel Sevier on July 3, 1984 in Ajax, Ontario, Canada, to Lynda and Bruce Sevier, he has a younger brother named Kyle. He is of Irish and French descent on his father’s side, and of Norwegian descent on his mother’s side. He began his career as a baby model at the tender age of six months. He landed his first acting job at age 7, appearing in the ABC mini-series “Family Pictures”. In August 2010, Corey became engaged to actress Laura Vandervoort, whom he had been dating for over five years. They split in 2011. 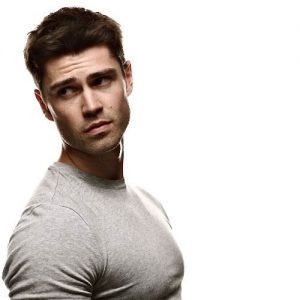 Corey Sevier Facts:
*He was born on July 3, 1984 in Ajax, Ontario, Canada.
*At the age of six months, he won a baby beauty pageant.
*He played Timmy Cabot on the 1990s version of Lassie.
*He plays soccer, tennis, hockey, basketball and baseball.
*Martial arts: Karate, Tae Kwon Do, Wushu, Ba Gua, Boxing.
*He learned to speak French at age 5.
*He is fluent in English and French.
*Visit his official website: www.coreysevier.com