Corinne Foxx is an American model and actress, best known as the daughter of Oscar-winning actor Jamie Foxx. Corinne started her modeling career at age 20, signing with LA Models, One Management in New York and Select Models in London. She has worked for brands including Ralph Lauren, Dolce & Gabbana, Kenneth Cole, and Wet ‘n’ Wild cosmetics. Corinne made her New York Fashion Week debut in 2016, walking for Kanye West’s Yeezy line, and walked New York Fashion Week for Sherri Hill’s Spring 2018 line in September 2017. She appeared in her first television role on Sweet/Vicious, airing November 2016. She played Sasha in the 2019 horror sequel 47 Meters Down: Uncaged. Born Corinne Marie Bishop on February 15, 1994 in Los Angeles, California, to parents Connie and actor Jamie Foxx, she has a younger half-sister named Anelise. She is of African-American descent on her father’s side, and of European descent on her mother’s side. She did her schooling from Sierra Canyon School and graduated from the University of Southern California, with a bachelor’s degree in Public Relations in 2016. She studied acting at the Howard Fine Acting Studio and American Academy For Dramatic Arts in Los Angeles. 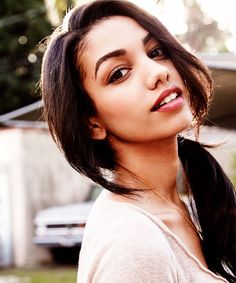 Corinne Foxx Facts:
*She was born on February 15, 1994 in Los Angeles, California, USA.
*She is the daughter of Connie and Oscar-winning actor Jamie Foxx.
*She made a cameo in The Jamie Foxx Show when Corinne was just six years old.
*She was a cheerleader in high school and was featured on the cover of American Cheerleader in 2011.
*She made her professional modeling debut for the fashion line Icing in February 2014.
*She signed in the LA Models agency in October 2014.
*She was named Miss Golden Globe 2016.
*Visit her official website: www.foxxtales.com
*Follow her on Twitter, Facebook and Instagram.