Courteney Cox is an American actress. She is best known for portraying Monica Geller on the NBC sitcom Friends from 1994 to 2004, and as Jules Cobb on the ABC/TBS sitcom Cougar Town from 2009 to 2015. She received a Golden Globe nomination for her work in Cougar Town. She played reporter Gale Weathers in the horror franchise Scream and had a recurring role in the TV series Family Ties from 1987 to 1989. As a director, she worked on her sitcom Cougar Town and the television film Talhotblond. Born Courteney Bass Cox on June 15, 1964 in Birmingham, Alabama, she is the youngest child of Courteney and Richard Lewis Cox. She belongs to English, Scottish, Welsh, Irish and German descent. She has two older sisters, Virginia and Dottie, and an older brother, Richard, Jr. Her parents divorced when she was four years old, and her mother then married businessman Hunter Copeland. She spent her growing years in Mountain Brook, Alabama, a suburb of Birmingham. Following her high school graduation, She enrolled at Mount Vernon College in Washington, D.C. to study architecture, but dropped out to pursue a modelling in New York City. She married David Arquette in 1999, and the couple had a daughter named Coco in 2004 before getting divorced in 2013. 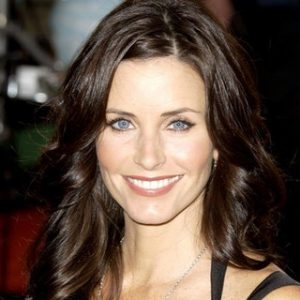 Courteney Cox Facts:
*She was born on June 15th, 1964 in Birmingham, Alabama.
*She was ten years old when her parents divorced.
*People Magazine named her one of the top 50 Most Beautiful People in the World in 1995.
*She is a big fan of the rock band Foo Fighters.
*In 2002, she was voted 18th “Sexiest Woman in the World” by Stuff magazine.
*She is good friends with Sheryl Crow, Laura Dern and Ellen DeGeneres.
*She was once engaged to Snow Patrol singer Johnny McDaid.
*Follow her on Twitter.