Craig Parker is a New Zealand actor, best known for his portrayal of Haldir in The Lord of the Rings film series. He is also known for starring as Darken Rahl in the television series Legend of the Seeker, Stéphane Narcisse in the CW television series Reign, and Gaius Claudius Glaber in the television series Spartacus. Other notable television roles include Guy Warner in Shortland Street, Alistair Kingsley in Mercy Peak, Leighton Mills in Diplomatic Immunity, and Alastair Caine in Charmed. Parker’s theater credits include The Seagull, Arcadia, Wind in the Willows, Amy’s View, The Judas Kiss, The Rocky Horror Show, and The Pillowman. Born on November 12, 1970 in Suva, Fiji, to parents Barry and Robin, he is of Scottish, Welsh, Danish, English and Cornish descent. He has an older sister named Wendy, and a younger brother Junior. 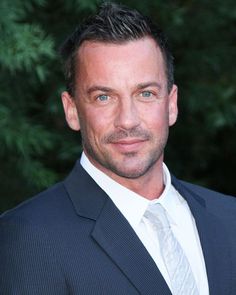 Craig Parker Facts:
*He was born on November 12, 1970 in Suva, Fiji.
*His ancestry includes Scottish, Welsh, Danish, English and Cornish.
*He made his screen debut at age 17 on TV drama Hotshotz (1989).
*He is openly gay.