Kate Hudson is an American actress. She is best known for her role as Penny Lane in the 2000 film Almost Famous, for which she won a Golden Globe and was nominated for the Academy Award for Best Supporting Actress. She has also starred in How to Lose a Guy in 10 Days, Raising Helen, The Skeleton Key, You, Me and Dupree, Mother’s Day, Nine, Bride Wars, Fool’s Gold, Deepwater Horizon, and Marshall. As a writer, Hudson has published two books, Pretty Happy: Healthy Ways to Love Your Body (2016), and Pretty Fun: Creating and Celebrating a Lifetime of Tradition (2017). Born Kate Garry Hudson on April 19, 1979 in Los Angeles, California, she is the younger child of Oscar-winning actress Goldie Hawn and musician Bill Hudson. She has one older brother named Oliver. She also has one half-brother and three half-sisters. She graduated from Crossroads, a Santa Monica (CA) performing arts school, in 1997. From 2000 to 2007, Hudson was married to musician Chris Robinson with whom she had a son named Ryder in 2004. She also had a son named Bingham in 2011 with Muse front-man Matthew Bellamy. In 2017, she began dating Danny Fujikawa. They welcomed a daughter named Rani in 2018. 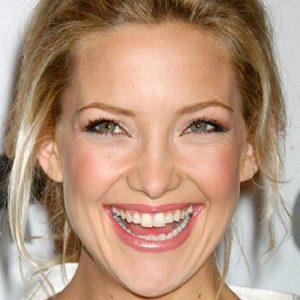 Kate Hudson Facts:
*Born on April 19, 1979 in Los Angeles, California, she was raised Jewish.
*She is the daughter of Goldie Hawn and Bill Hudson, and granddaughter of Rut Hawn and Laura Hawn.
*She was 18 months old when her parents divorced.
*She is the cousin of chiropractor David Birznieks and singer Sarah Hudson.
*She began her career as an actress in 1996.
*People Magazine named her one of the top 50 Most Beautiful People in the World in 2002.
*She was ranked #51 in “Stuff” magazine’s “102 Sexiest Women In The World” in 2002.
*She is the co-founder of the fitness brand Fabletics.
*She enjoys playing guitar, writing music, arts and crafts.
*Like her mother, Hudson also practices Buddhism
*She can play guitar and piano.
*She has three dogs: Bella (a Neapolitan mastiff), Doctor (an English bulldog) and Clara (a Pomeranian).
*Follow her on Facebook and Instagram.