Internet celebrity Curtis Lepore, was born in Smithtown, New York, USA on June 28, 1983. He is best known for his Vine videos, and is one of the top 5 most followed Vine stars since 2013. He has earned over 9 million followers on Vine app making him Top 10 popular Vine star in 2016. He is also popular on YouTube with over 700,000 subscribers on his self-titled channel. 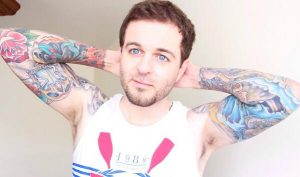 Curtis Lepore Education:
He attended and graduated from State University of New York at Oswego.

Curtis Lepore Facts:
*He is ranked as the seventh most popular user on Vine as of August 2016.
*He was a vocalist for a band, GhostxShip.
*He has been in a relationship with vine star Claire Felske.
*He is vegan and straight edge.
*He has collaborated with Vine superstars such as Christian DelGrosso, Logan Paul, Amanda Cerny, Jerry Purpdrank and many more.
*In October 2013, Curtis was alleged to have raped his then-girlfriend, Jessi “Smiles” Vazquez.
*Follow him on Twitter, Facebook, YouTube, and Instagram.