Cynthia Nixon is an American actress, politician and activist. She is best known for playing the role of lawyer Miranda Hobbes in the HBO series Sex and the City, for which she won the 2004 Primetime Emmy Award for Outstanding Supporting Actress in a Comedy Series. She played Nancy Reagan in the 2016 television film Killing Reagan. For her performance in Rabbit Hole, she won the 2006 Tony Award, Best Performance by a Leading Actress in a Play. Her notable film credits include, Sex and the City, Sex and the City 2, Amadeus, James White, and A Quiet Passion. Born Cynthia Ellen Nixon on April 9, 1966 in New York City, New York, to parents Walter, a radio journalist, and Anne, a Chicago actress, she belongs to English and German descent. After graduating from Hunter College High School in New York City, she attended Barnard College. She studied drama at HB Studio in Greenwich Village in New York City. She made her Broadway debut as Dinah Lord in The Philadelphia Story in 1980. She was in a relationship with Danny Mozes from 1988 to 2003. They have two children. In 2004, she began dating education activist Christine Marinoni, and became engaged in April 2009. The couple had a son Max Ellington, in 2011. They married in 2012. 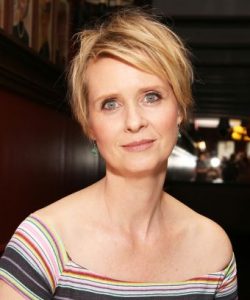 Cynthia Nixon Facts:
*She was born on April 9, 1966, in New York City.
*She was six years old when her parents divorced.
*In 2005, she ranked #88 on VH1’s The Greatest: 100 Greatest Kid Stars.
*She is a breast cancer survivor.
*She was honored with the Visibility Award by the Human Rights Campaign in 2018.
*In March 2018, she announced that she was running for Governor of New York.
*Visit her official website: www.cynthiafornewyork.com
*Follow her on Twitter and Instagram.