Daisy Chute is a folk songstress, multi-instrumentalist and regular on the London music scene. She is best known for being a member of the musical group All Angels since July 2010. Her All Angels band ‘family’ includes Charlotte Ritchie, Melanie Nakhla, and Rachel Fabri. With All Angels, Chute performed at venues such as Wembley Stadium at the 2011 UEFA Champions League Final, Cadogan Hall, Royal Albert Hall, Manchester Arena, Birmingham Genting Arena and the Sheffield Arena. Together, the group released an EP called ‘Starlight’. Born on August 7, 1989 in Scotland, UK, she is of Scottish/American heritage. She attended St Mary’s Music School Edinburgh, where she was a chorister at St. Mary’s Episcopal Cathedral and Loretto School and began her performing career at the age of nine as the young Cosette in the touring production of Les Misérables. She received a Bachelor of Music degree at King’s College, University of London. 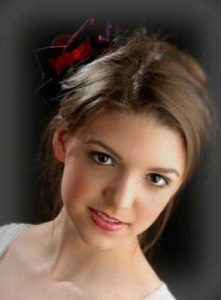 Daisy Chute Facts:
*She was born on August 7, 1989 in Scotland, UK.
*She started her musical education as a chorister at St Mary’s Music School.
*She recorded her debut album, Simply Jazz at age 15.
*She won the Scottish Music Centre’s Young Composer’s competition in 2008.
*She is the co-founder of HEARD Collective – an artist collective who promote and support women in music , and the co-writer of COVEN – a gig theatre show about witches set to tour in 2020.
*Visit her official website: www.daisychute.com
*Follow her on Twitter, YouTube, SoundCloud, Facebook and Instagram.