Dale Earnhardt Jr is an American semi-retired professional stock car racing driver, team owner, author, and an analyst for NASCAR on NBC. Earnhardt won the Busch Series Championship in 1998 and 1999 and the Daytona 500 in 2004 and 2014. He joined the NASCAR on NBC broadcasting team as a color commentator for the 2018 season. Earnhardt made his debut on NBCSN’s NASCAR America on March 12, 2018, joining Leigh Diffey, Jeff Burton, and his former crew chief Steve Letarte. He owns Hammerhead Entertainment, a media production company that created and produced the TV show Back in the Day, which aired on SPEED. He is also a co-owner of “Chance 2 Motorsports,” a Busch Series race team. 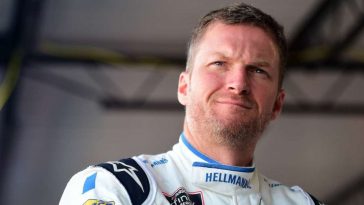 Born Ralph Dale Earnhardt Jr. on October 10, 1974 in Kannapolis, North Carolina, he is the son of Dale Earnhardt Sr., who was inducted into the NASCAR Hall of Fame. He is also the grandson of NASCAR driver Ralph Earnhardt, the brother of Kelley Earnhardt-Miller, the half-brother of former driver Kerry Earnhardt and the uncle of driver Jeffrey Earnhardt. He has been married to Amy Reimann since December 31, 2016. They have two daughters together.

Dale Earnhardt Jr. Facts:
*He was born on October 10, 1974 in Kannapolis, North Carolina, USA.
*His father, Dale Earnhardt Sr., tragically died during the Daytona 500 in 2001.
*He has one older sister, Kelley Earnhardt; one younger half-sister, Taylor Nicole Earnhardt; one older half-brother, Kerry Earnhardt.
*He went into his first race with a car he co-owned with his half brother Kerry.
*He has been driving the number 88 car since the beginning of the 2008 race schedule.
*He won his 12th consecutive Sprint Cup Series Most Popular Driver Award in 2014.
*He is the owner of the #8 Bass Pro Shops Chevrolet, piloted by Martin Truex Jr., in Busch Series competition.
*His favorite things to do is to hang out with his friends at the local Wal-Mart store.
*He is good friends with Chris Cooley, tight end for the Washington Redskins, and Gary Allan.
*He anounced his retirement from NASCAR at the end of 2017
*Visit his official website: www.dalejr.com
*Follow him on Twitter, YouTube, Facebook and Instagram.