Danielle Bisutti is an American actress and singer. She is best known for her portrayal of Amanda Cantwell on the hit Nickelodeon series True Jackson, VP from 2008 to 2011. Her other television credits include Last Man Standing, Parks & Recreation, CSI: Miami, Castle, Hot in Cleveland, 90210, Private Practice, Body of Proof, Without a Trace, Raising the Bar and The O.C., NCIS, Criminal Minds, Bones, Cold Case, Two and a Half Men and Boston Legal. She has also played prominent roles in the films No Greater Love, Curse of Chucky, and Insidious: Chapter 2. Also a songwriter, she has written songs like “Venice Underground” and “April Moon.” 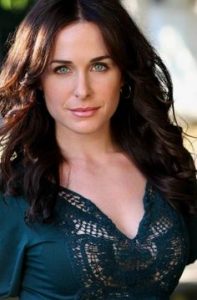 Danielle Bisutti Facts:
*She was born on October 1, 1976 in Los Angeles, California, USA.
*She is of Italian descent.
*As a teenager, she was involved in athletics, theater, choir, debate, dance, and speech.
*She received a BA in Acting and Musical Theatre at California State University, Fullerton.
*She played Amanda Cantwell on the popular Nickelodeon series True Jackson, VP from 2008 to 2011.
*She admires Cate Blanchett and Nicole Kidman.
*She was briefly married to an Italian entrepreneur Lorenzo Cascino.
*Visit her official website: www.daniellebisutti.com
*Follow her on Twitter, YouTube, Facebook and Instagram.