Hanaa Ben Abdesslem is a Tunisian model who has worked with such designers as Jean Paul Gautier, Thierry Mugler, Giambattista Valli, Chanel, Narciso Rodriguez, Vivienne Westwood, Oscar de la Renta, and Anna Sui. She has posed for Vogue Paris, Italy, Netherlands, Thailand, Spain, and Germany. She has also appeared in W, Dazed and Confused, V, and the Russian magazine Interview. Abdesslem is the first Arab model to be appeared in the Pirelli calendar as well as the first Muslim spokesmodel for Lancôme. Born on October 18, 1990 in Nabeul‎, Tunisia, into a conservative family, she has an older brother named Walid. She was a contestant on Mission Fashion 2 in 2007, the Lebanese version of Project Runway where she placed second. She first signed with IMG Models in 2010, and signed contract with Lancome in 2012. 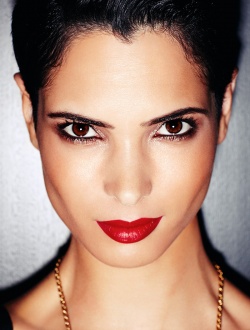 Hanaa Ben Abdesslem Education:
She was studying engineering before deciding to become a model.

Hanaa Ben Abdesslem Facts:
*She was born on October 18, 1990 in Nabeul‎, Tunisia.
*She competed on Lebanon’s version of Project Runway, Mission Fashion 2 in 2007 and placed second.
*She was named as the spokesperson for NGO Esmaani in July 2011.
*She is the first ever Muslim face of Lancome.
*Visit her official website: www.hanaabenabdesslem.co.uk
*Follow her on Facebook and Instagram.