Danielle Bregoli is an American rapper and social media personality who became recognized for the viral video meme and catch phrase “Cash Me Ousside How Bout Dah” after appearing on the Dr. Phil show in September 2016. Bregoli released her debut single “These Heaux” on August 26, 2017. These Heaux reached #77 on the Billboard Hot 100, making Bregoli the youngest female rapper to debut on the music chart. On September 22, 2017, Bregoli released “Hi Bich” and a day after, “Whachu Know”, as a single alongside the music video, which received over a million views in 24 hours. She has amassed more than 16.9 million followers on her bhadbhabie Instagram account. Born Danielle Marie Peskowitz on March 26, 2003 in Boynton Beach, Florida, USA, to Ira Peskowitz and Barbara Ann Bregoli, she is of Jewish descent on her father’s side, and of Italian descent on her mother’s side. Bregoli was raised in a Catholic household primarily by her mother. 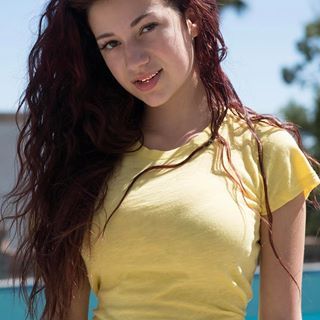 Danielle Bregoli Facts:
*She was born on March 26, 2003 in Boynton Beach, Florida, USA.
*She belongs to both Jewish and Italian descent.
*She went viral for her appearance on Dr. Phil.
*She signed a music deal with Atlantic Records in 2017.
*She released her first mixtape, 15, in September 2018.
*She was nominated for a Billboard Music Award for Top Rap Female Artist in 2018.
*She was sentenced five years on probation after having several episodes of marijuana possession and grand theft auto.
*Visit her official website: www.bhadbhabie.com
*Follow her on Twitter, SoundCloud, YouTube, Facebook and Instagram.