Danielle Campbell is an American film and television actress. She is best known for her roles as Jessica Olson in the 2010 Disney Channel Original Movie StarStruck and Simone Daniels in the 2011 Disney film Prom, and Davina Claire in the 2013 CW television drama series The Originals. She had a recurring role as Harper Tate on the TV series Famous in Love. In June 2018, Dani was cast as Kayla in the CBS All Access fantasy drama series Tell Me a Story. Born Danielle Marie Campbell on January 30, 1995 in Hinsdale, Illinois, USA, to John and Georganne Campbell, she has one younger brother named Johnny. She was discovered at the age of 10 in a hair salon in Chicago and debuted on television on FOX’s Prison Break. She made her film debut in the 2008 movie The Poker House. She was in a relationship with One Direction singer Louis Tomlinson from 2015 to 2016. 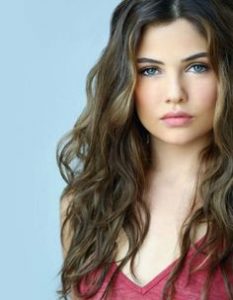 Danielle Campbell Facts:
*She was born on January 30, 1995 in Hinsdale, Illinois, United States.
*She was discovered in 2005 in a hair salon in Chicago.
*She knows how to surf.
*She is friends with Nathaniel Buzolic.
*Follow her on Twitter, Google+, Facebook and Instagram.