Danny DeVito is an American actor and filmmaker who rose to prominence for his role of the taxi dispatcher Louie De Palma in the television series Taxi (1978–1983), for which he won a Golden Globe Award and an Emmy Award. He has also starred in such films as Tin Men, Throw Momma from the Train, One Flew Over the Cuckoo’s Nest, Ruthless People, Man on the Moon, Look Who’s Talking Now, Big Fish, Other People’s Money, Terms of Endearment, Romancing the Stone, Twins, Batman Returns, Get Shorty, Be Cool and L.A. Confidential. In 2006, he began starring in the FX sitcom It’s Always Sunny in Philadelphia as Frank Reynolds. Born Daniel Michael DeVito Jr. on November 17, 1944, in Neptune, New Jersey, to Italian-American parents Julia and Daniel DeVito Sr., he belongs to Italian descent. Danny was raised in Asbury Park, New Jersey. He attended and graduated in 1962 from Oratory Preparatory School, a boarding school in Summit, New Jersey. He graduated in 1966 from the American Academy of Dramatic Arts (AADA) in Hollywood, CA. He made his film debut as Fred Mancusso in the 1971 French-Italian comedy movie, Lady Liberty. He married actress Rhea Perlman in 1982. They have three children. 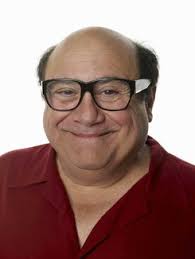 Danny DeVito Facts:
*He was born on November 17, 1944 in Asbury Park, New Jersey, USA.
*He was raised as a Catholic.
*He used to work as a cosmetician after graduating college.
*He is an avid supporter of International Myeloma Foundation.
*In 1992, he and wife Rhea Perlman founded the production company Jersey Films.
*He is a big fan of musician Mike Patton and his bands Fantomas and Peeping Tom.
*He is close friends with Lucy Liu, Kristin Chenoweth, and Judd Hirsch.
*Follow him on Twitter.