Daria Gavrilova is an Australian professional tennis player who achieved her career’s best ranking on June 19, 2017, which was #21. She represented Russia until 2015, before emigrating to Australia. She was born in Moscow, Russia, and became an Australian citizen in December 2015. 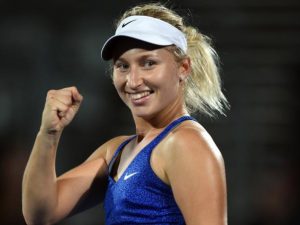 Daria Gavrilova Facts:
*She became an Australian citizen in December 2015.
*She won a doubles competition at the Istanbul Cup alongside Elina Svitolina.
*She began dating Australian tennis player Luke Saville.
*Follow her on Twitter, Facebook and Instagram.