Daryl Hannah is an American actress. She is best known for her roles in the films Blade Runner, Summer Lovers, Splash, Roxanne, Wall Street, and the comedy-drama Steel Magnolias. Hannah won a Saturn Award for her role as one-eyed assassin Elle Driver in Quentin Tarantino’s two-part martial arts action film Kill Bill in 2004. From 2015 to 2018, she appeared as Angelica Turing in the Netflix series Sense8. 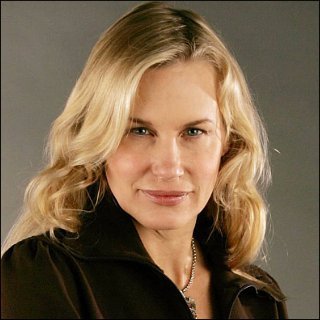 Born Daryl Christine Hannah on December 3, 1960 in Chicago, Illinois, to parents Susan Jeanne Metzger, a producer and former schoolteacher, and Donald Christian Hannah, a tugboat and barge company owner, she is of Norwegian, Scottish, Irish, English, and German descent. Her parents divorced and her mother subsequently married businessman Jerrold Wexler, brother of cinematographer Haskell Wexler. Hannah attended and graduated from the University of Southern California School of Theatre. She also practiced ballet with Maria Tallchief and studied drama at Chicago’s Goodman Theatre. Hannah began a relationship with musician Neil Young in 2014 and they married in July 2018. She has three step-children: Zeke Young, Ben Young and Amber Jean Young.

Daryl Hannah Facts:
*Born on December 3, 1960 in Chicago, Illinois, she was raised Roman Catholic.
*She is the sister of Page Hannah and Don Hannah, and maternal half-sister of Tanya Wexler.
*She made her film debut in Brian De Palma’s supernatural horror film The Fury (1978).
*Made McCall’s “10 Best Female Bodies In America” list in 1984.
*Empire magazine named her as one of the 100 sexiest stars in Hollywood (1995).
*She has been declared as the “Sexiest Actress Alive” by Glamour magazine (August 2015 issue).
*She is good friends with Hilary Shepard and John Corbett.
*She dated John F. Kennedy, Jr. for five years.
*She had a long-term relationship with musician Jackson Browne.
*She has autism.
*Follow her on Twitter, Facebook and Instagram.