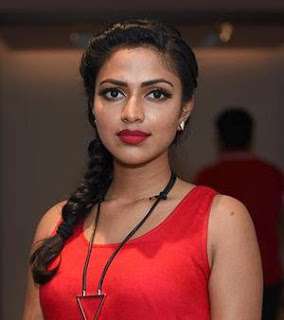 Born on October 26, 1991 in Aluva, India, to parents Paul Varghese and Annice Paul, she is the sister of actor Abijith Paul. Amala did her schooling from Nirmala higher secondary school, Aluva and Aluva Government Higher Secondary School, took a year out before joining college. She later joined St Teresa’s college, to pursue a B.A. degree in Communicative English. She was married to director A. L. Vijay from 2014 to 2017.

Amala Paul Facts:
*She was born on October 26, 1991 in Aluva, India, in a Christian family.
*She worked as a model while studying in college.
*She made her film debut as Beena in Neelathamara in 2009.
*She came to prominence after being cast in the romantic drama film Mynaa (2010).
*She has worked with celebrities like Kamal Haasan, Rajinikanth, R. Madhavan, and Sameera Reddy
*She broke her right arm in August 2018.
*She is very fond of dogs.
*Follow her on Twitter, Facebook and Instagram.