David Beckham is an English former professional footballer who mainly played as a midfielder. One of Britain’s most iconic athletes, David Beckham has played for Manchester United, Preston North End, Real Madrid, Milan, LA Galaxy, Paris Saint-Germain and the England national team. He is the first English footballer to compete in 100 Champions League matches as well as the first to win league titles in four countries: England, Spain, USA and France. He was captain of the English national team from 2000 to 2009. Born David Robert Joseph Beckham on May 2, 1975, in Leytonstone, London, England, to Sandra Georgina and David Edward Alan Beckham, he has an older sister, Lynne Georgina, and a younger sister, Joanne Louise. He began his soccer career with Manchester United at the age of 17. He played for Manchester United from 1993 to 2003, and led to six Premier League titles. He is married to Victoria Beckham with whom he has three sons; Romeo, Cruz and Brooklyn and a daughter, Harper. He retired from playing soccer in May 2013 after a 20-year career, during which he won 19 major trophies. 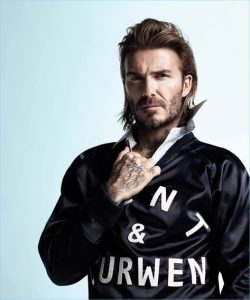 David Beckham Facts:
*He was born on May 2, 1975, in London, England.
*His wife is singer Victoria Beckham.
*He became the first British footballer to win league titles in four countries: England, Spain, the United States and France.
*He is the first English player to score at three FIFA World Cups
*He missed out 2010 World Cup due to injury.
*He was named as one of “Time” magazine’s Time 100 in 2004.
*Queen Elizabeth II gave Beckham an OBE in June 2003.
*He became a UNICEF ambassador in January 2005.
*He is friends with Tom Cruise, Guy Ritchie, Gordon Ramsay, Snoop Dogg, and Liv Tyler.
*Visit his official website: www.davidbeckham.com
*Follow him on Google+, YouTube, Facebook and Instagram.