Kirshnik Ball is an American rapper. He is best known as a member of the rap trio ‘Migos’ who are famous for their 2013 hit “Versace.” The other members of the group are Quavo and Offset. Migos released its first album Yung Rich Nation in 2015, which reached at number 3 on the Top Rap Albums chart in US. With Migos, he has collaborated with numerous artists such as R. Kelly, Busta Rhymes, Gucci Mane, Riff Raff, and more. Born Kirshnik Khari Ball on 18 June 1994, in Lawrenceville, Georgia, the three members of the Migos raised together by Quavo’s mother, in Gwinnett County, a mostly suburban area half an hour northeast of Atlanta. Quavo is the uncle of Takeoff and Offset is the cousin of Quavo. 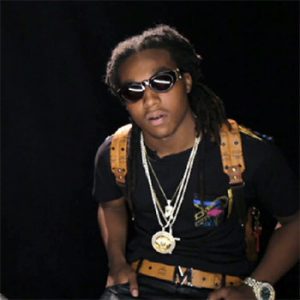 Kirshnik Ball Facts:
*Born on 18 June 1994, in Lawrenceville, Georgia, he was raised in Gwinnett County.
*He is better known by his stage name Takeoff.
*Quavo is Takeoff’s uncle, and Offset is Quavo’s cousin.
*He started developing rhythms and making beats in the seventh grade.
*Follow him on Twitter and Instagram.