David Cook is an American pop/rock singer-songwriter who won season seventh of American Idol in 2008 and became the first Midwestern and first rocker to win American Idol. He won American Idol by 12 million votes over David Archuleta, the runner-up. He has released four albums to date, Analog Heart, David Cook, This Loud Morning, and Digital Vein. For his song ‘Time of My Life’, he won the Song of the Year at the Nashville Music Awards. The middle of three brothers, David was born on David Roland Cook December 20, 1982 in Houston, Texas, and grew up in Blue Springs, Missouri. He is the son of Beth Foraker and Stanley Cook, and belongs to German, Irish, and English descent. He has been married to Rachael Stump since 2015. 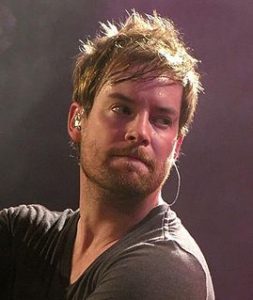 David Cook Facts:
*While in high school, he was a baseball player.
*He was a member of the Phi Sigma Kappa fraternity while in college.
*In 2009, his brother Adam died due to brain cancer.
*He cites Our Lady Peace, Alice in Chains, Big Wreck, Pearl Jam, Bon Jovi, Chris Cornell, The Goo Goo Dolls, Switchfoot, and Collective Soul as musical influences.
*He has a dog named Dublin.
*Visit his official website: www.DavidCookOfficial.com
*Follow him on Twitter, YouTube, Myspace, Facebook and Instagram.