David Copperfield is an American magician who is described by Forbes as the most commercially successful magician in history. Famous for his combination of storytelling and illusion, Copperfield has won a total of 21 Emmy Awards, and his career of over 40 years has earned him 11 Guinness World Records. Copperfield was awarded a Star on the Hollywood Walk of Fame for Live Performance at 7021 Hollywood Boulevard in Hollywood, California on April 25, 1995. Born David Seth Kotkin on September 16, 1956 in Metuchen, New Jersey, to Jewish parents, Rebecca and Hyman Kotkin, he’s an only child. Copperfield graduated from Metuchen High School in 1974. Since 2006, he has been in a relationship with French fashion model Chloe Gosselin with whom he has a daughter named Sky. 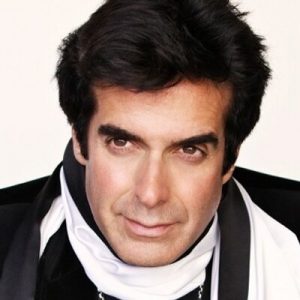 David Copperfield Facts:
*He was born on September 16, 1956 in Metuchen, New Jersey, USA.
*He started practicing magic under the name Davino the Boy Magician in his neighborhood.
*His career of over 40 years has earned him 11 Guinness World Records.
*He has won a total of 21 Emmy Awards and 38 nominations.
*He has been named a Living Legend by the US Library of Congress, and was knighted by the French government.
*One of Copperfield’s schoolteachers New Jersey school days was ABC News correspondent Judy Muller.
*In 2007, he was accused of sexual assault by Lacey L. Carroll.
*He owned a chain of eleven resort islands in the Bahamas.
*He is a huge fan of Carl Ballantine.
*He likes roller coasters.
*Visit his official website: www.davidcopperfield.com
*Follow him on Twitter, Facebook and Instagram.