Mollie King is a British singer-songwriter, television and radio presenter and model. She is best known as a member of the British-Irish girl group The Saturdays. The other members of the group are Vanessa White, Frankie Sandford, Una Healy and Rochelle Wiseman. The Saturdays released their debut album, Chasing Lights, in 2008 and charted at number nine on the UK Albums Chart. On 7 August 2017, King took part in the fifteenth series of BBC’s Strictly Come Dancing, partnered with AJ Pritchard. She has also appeared in a couple of TV series such as Hollyoaks Later and The King is Dead. In 2018, King became one of the main relief presenters on This Morning. Born Mollie Elizabeth King on June 4, 1987 in London Borough of Wandsworth, United Kingdom, to parents Susan and Stephen King, she has two older sisters, Ellen and Laura Ann. King was educated at Surbiton High School, in Kingston-upon-Thames, London. [© celebsfacts.com] Before she found fame as the member of The Saturdays, she was a member of another girl group, Fallen Angelz, with whom she appeared on The X Factor. She has dated Andy Brown, John Mayer, David Gandy and Jordan Omley. 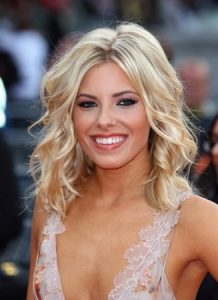 Mollie King Facts:
*She was born on June 4, 1987 in London Borough of Wandsworth, United Kingdom.
*She had a successful ski career and was on the Surbiton High Ski team with fellow pupil Chemmy Alcott.
*Growing up, she was diagnosed with dyslexia.
*She studied psychology and business.
*She is a member of the music group The Saturdays, along with Rochelle Humes, Frankie Bridge, Una Healy, and Vanessa White.
*She signed a solo deal with Island Records in 2015.
*She can play the guitar.
*She has a fashion line called Loved by Mollie.
*She is a big fan of Britney Spears and cites the singer as a personal influence.
*She was in a relationship with Lawson member Andy Brown from January 2010 to February 2011.
*Visit her official website: www.mollieking.com
*Follow her on Twitter, YouTube, Facebook and Instagram.