David Gandy is a British male fashion model who is mainly known for the 2007 advertising campaign for Dolce & Gabbana’s fragrance “Light Blue” with Marija Vujovic, which had 11 million online hits and included a 50-foot billboard of Gandy displayed in Times Square. He modelled for Dolce & Gabbana’s 2008 calendar, shot by photographer Mariano Vivanco. Gandy has modeled for brands such as Banana Republic and Marks & Spencer. Born David James Gandy on February 19, 1980 in Billericay, UK, to parents Brenda and Chris Gandy, he has a sister named Claire. He studied marketing at the University of Gloucestershire. Gandy began his career after winning a televised model-search competition. He has a daughter named Matilda with his partner, barrister Stephanie Mendoros. 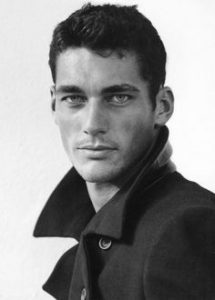 David Gandy Facts:
*He was born on February 19, 1980 in Billericay, UK.
*He is of Greek descent.
*He was the lead male model for Italian designers Dolce & Gabbana for several years.
*He was the only male walking the catwalk alongside supermodels like Karen Elson, Jourdan Dunn, Lily Donaldson, Georgia May Jagger and Kate Moss during the 2012 Summer Olympics closing ceremony.
*Spanish Glamour magazine included Gandy “Most Beautiful International Male Face” at an event in Madrid, Spain. (2008)
*Forbes magazine named him as the world’s third most successful male model, behind Matt Gordon and Sean O’Pry. (2009)
*He was the first male ever nominated for “Model of the Year” by the British Fashion Council (BFC). (2010)
*Glamour readers voted him one of the “100 Sexiest Men of 2012”.
*Cosmopolitan included Gandy one of “The Sexiest Men of 2013” and British GQ named him in their 2013 list of the “100 Most Influential Men in Britain”
*He has dated Mollie King and Sarah Macklin.
*Follow him on Twitter, Pinterest, Tumblr, Facebook and Instagram.