David Haye is a British former professional boxer who competed from 2002 to 2018. He is the former WBA world heavyweight champion and the former undisputed (WBA, WBC and WBO) world cruiserweight champion. He became the first British boxer to reach the final of the World Amateur Boxing Championships, where he won a silver medal in 2001. He participated in the twelfth series of I’m a Celebrity, Get Me Out of Here! in 2012, where he finished third. Born David Deron Haye on October 13, 1980 in Bermondsey, London, England, UK, to a white English mother, Jane Haye, and a black Jamaican father, Deron Haye. He has a sister Louisa and brother James. Haye attended Bacon’s College in Rotherhithe, South East London. He started boxing in the lightweight division at the age of eighteen. He has been married to Natasha Haye since 2008. Together they have one son, Cassius Haye. 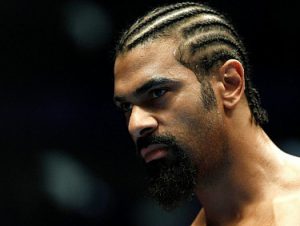 David Haye Facts:
*He was born on October 13, 1980 in Bermondsey, London, England, UK.
*He belongs to both Jamaican and English descent.
*He is one of only two boxers in the history of the sport to unify the World Cruiserweight Titles and then venture to the Heavyweight class.
*His son was named after Cassius Clay.
*In 2014, he became vegan, and launched his own range of vegan protein.
*Haye was named one of PETA’s Sexiest Vegan Celebrities of 2014 in United Kingdom.
*He has twice been shortlisted for BBC Sports Personality of the Year.
*He is married to Natasha with whom he has a son.
*Visit his official website: www.hayemaker.com
*Follow him on Twitter, Facebook and Instagram.