David Lee Roth is an American rock singer-songwriter, musician, and former radio personality. He is best known as the lead vocalist of hard rock band Van Halen across three stints, from 1974 to 1985, in 1996, and again from 2006 to their disbandment in 2020. Their biggest success was the song “Jump” in 1984 – the song reached No. 1 on the Billboard charts. As a successful solo artist, Roth has released numerous RIAA-certified Gold and Platinum albums. In October 2012, Roth began to broadcast a video webcast on his YouTube channel, Spotify and iTunes. 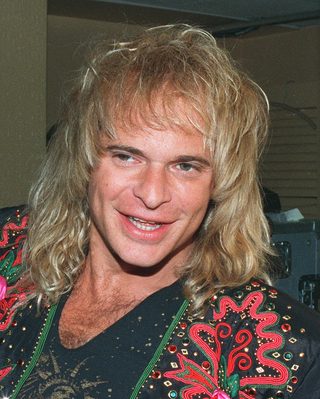 Born on October 10, 1954 in Bloomington, Indiana, to an ophthalmologist, Nathan Lee, and a teacher, Sibyl Roth, he has two sisters. Roth graduated in 1972 from John Muir High School in Pasadena, California. He has never married.

David Lee Roth Facts:
*Born on October 10, 1954 in Bloomington, Indiana, he is of Jewish heritage.
*He was a radio personality before becoming a rock star.
*He is famous for his wild and energetic stage persona.
*He was ranked #100 on VH1’s 100 Sexiest Artists.
*He released his autobiography book titled “Crazy From The Heat” in 1997.
*He was inducted into the Rock and Roll Hall of Fame as a member of Van Halen in 2007.
*He is an avid mountain climber.
*He is fluent in Spanish.
*He is a martial artist, has been training in kenjutsu since he was twelve years old, and also practices kenpō and Brazilian jiu-jitsu.
*Visit his official website: www.davidleeroth.com
*Follow him on Twitter, YouTube, Facebook and Instagram.