De’Andre Hunter is an American professional basketball player who plays for the Atlanta Hawks of the National Basketball Association at the small forward position. Hunter played college basketball for the Virginia Cavaliers where they won the National Championship in 2019. He was selected 4th overall by the Los Angeles Lakers in the first round of the 2019 NBA draft. 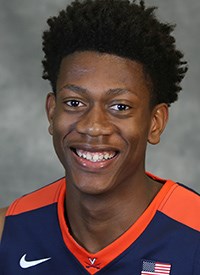 De’Andre Hunter Facts:
*He was born on December 2, 1997 in Philadelphia, Pennsylvania, USA.
*He played high school ball at Friends’ Central School and was a four-star recruit.
*He was named to the ACC All-Freshman Team and named the ACC Sixth Man of the Year during his freshman season at Virginia.
*He was drafted by the Los Angeles Lakers with the 4th overall pick in the 2019 NBA draft on June 20, 2019.
*He made his debut in NBA, started in a 117–100 win over the Detroit Pistons with fourteen points and two rebounds. (October 24, 2019)
*Follow him on Twitter, Facebook and Instagram.