American actress, Debra Messing is most famous for her portrayal of interior designer Grace Adler on the NBC sitcom Will & Grace. Her other notable television credits include Ned & Stacey, The Starter Wife, Smash and The Mysteries of Laura. For her role in the 2007 USA miniseries The Starter Wife, she earned a Gracie Allen Award. She made her film debut in A Walk in the Clouds (1995). She was born Debra Lynn Messing on August 15, 1968 in Brooklyn, New York City, New York, USA to Jewish American parents. Her parents are Sandra Simons and Brian Messing. She has one older brother, Brett Messing. She married Daniel Zelman in 2000, and the couple had a son named Roman Walker Zelman in 2004 before getting divorced in 2012. 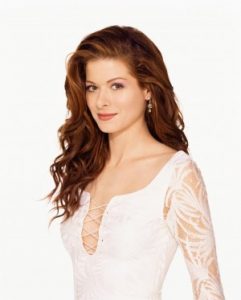 Debra Messing Facts:
*She moved to East Greenwich, Rhode Island with her parents at age 3.
*She is severely allergic to perfumes and flowers.
*People Magazine named her one of the top 50 Most Beautiful People in the World in 2002.
*Follow her on Twitter, Facebook, Google+ and Instagram.