Demi-Leigh Nel-Peters is a South African model and beauty pageant titleholder who was crowned Miss South Africa 2017 and Miss Universe 2017. Nel-Peters is the 2nd Miss Universe winner from South Africa, following Margaret Gardiner who was crowned Miss Universe 1978. Born on June 28, 1995 in Sedgefield, Western Cape, South Africa, to parents Bennie Peters and Anne-Marie Steenkamp, her half-sister, Franje, had a physical disability at birth and had cerebellar agenesis, and Nel-Peters said that she was the most significant motivator in her life; she announced that Franje had died at age 13 on May 4, 2019. She graduated from North-West University in 2017 with a bachelor’s degree in in Business Management and Entrepreneurship. She modeled part-time for Boss Models and Vision Management Cape Town. She can speak both English and Afrikaans. In 2018, she started dating American baseball player Tim Tebow. They became engaged on January 10, 2019. 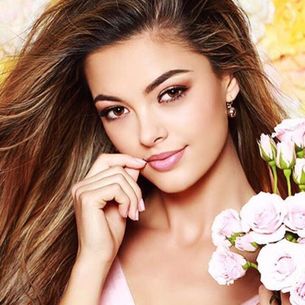 Demi-Leigh Nel-Peters Facts:
*She was born on June 28, 1995 in Sedgefield, Western Cape, South Africa.
*She studied business management at North-West University.
*She became Miss Universe in 2017.
*She is the 2nd Miss Universe from South Africa, following Margaret Gardiner who was crowned Miss Universe 1978.
*She has two pet dogs, Baxter and Benji.
*She is fluent in English and Afrikaans.
*Follow her on Twitter, Facebook and Instagram.