Denise Richards is an American actress and former fashion model. She is notable for her roles in such films as Wild Things, Drop Dead Gorgeous, Starship Troopers, The World Is Not Enough, and the 2001 film Valentine. She also appeared on the E! reality show Denise Richards: It’s Complicated from 2008 to 2009. Her other well-known television credits include Against the Grain, Melrose Place, Spin City, Two and a Half Men, Sex, Love & Secrets, Blue Mountain State, 30 Rock, Anger Management, and Vanity. Born Denise Lee Richards on February 17, 1971, in Downers Grove, Illinois, to Joni and Irv Richards, she belongs to German, French-Canadian, Irish, English, Welsh, and distant Dutch descent. She has a younger sister named Michelle. She moved with her family from Downer’s Grove, Illinois to Oceanside, California, when she was 15 years old. She studied at Herrick Elementary School, followed by Downers Grove North High School in Illinois until 1985. She graduated from El Camino High School in Oceanside, California in 1989. She had two daughters named Sam and Lola with Charlie Sheen, whom she was married to from 2002 to 2005. She also adopted a daughter named Eloise Joni Richards. 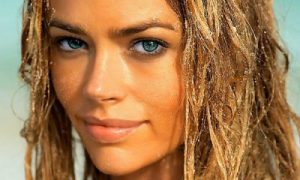 Denise Richards Facts:
*She was born on February 17, 1971, in Downers Grove, Illinois.
*Her mother died of cancer in December 2007.
*She started modeling in high school.
*She was a high school cheerleader.
*She is left-handed.
*She used to work as a make-up artist for Bonne Bell cosmetics.
*She once worked at a grocery store as a clerk.
*She appeared in the Double 1986 Music Video, “The Captain of Her Heart” at age 15.
*In 2002, she ranked #21 in Stuff magazine’s “102 Sexiest Women in the World”.
*She ranked #82 in 2005, and #89 in 2006 in the FHM magazine’s “100 Sexiest Women in the World” supplement list.
*In 2011, she ranked #61 in Men’s Health magazine’s 100 Hottest Women of All Time.
*She is an animal lover, and has several cats and dogs.
*She is good friends with Ali Landry Alison Sweeney, Lisa Rinna, and George Clooney.
*She met actor Charlie Sheen on the set of Good Advice in 2000. They became engaged on December 26, 2001, and married on June 15, 2002, at the estate of Spin City creator Gary David Goldberg. They divorced in 2005.
*Follow her on Twitter, Facebook and Instagram.