Denise van Outen is a British actress, model, singer, dancer and presenter. She is best known for presenting the British entertainment show, The Big Breakfast, and for her role as Roxie Hart in the musical Chicago both in the West End and on Broadway. She competed on the tenth series of Strictly Come Dancing where she finished as runner-up. She served as a judge on Ireland’s Got Talent which ran for two seasons (2018–2019), and was a judge on Any Dream Will Do in 2007, and Born to Shine in 2011. Born Denise Kathleen Outen on May 27, 1974 in Basildon, Essex, England, UK, to parents Kathleen and Ted Outen, she has a sister Jackie and brother Terry. At the age of 7, Outen modeled for knitting commercials. She attended the Sylvia Young Theatre School. She participated in the dance reality show, Strictly Come Dancing in 2012. She married Lee Mead in 2009, and the couple had a daughter named Betsy in 2010 before getting divorced in 2013. In 2014, she started dating day trader Eddie Boxshall. 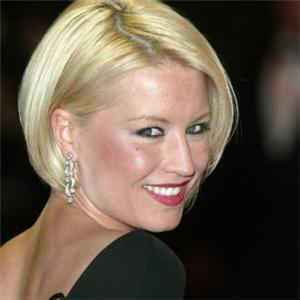 Denise van Outen Facts:
*She was born on May 27, 1974 in Basildon, Essex, England, UK.
*She grew up in a Catholic household.
*At 7, she appeared in an endorsement campaign for knitting patterns.
*She was cast in the West End production of the iconic play, Les Miserables at the age of 11.
*She placed second in the tenth series of the BBC One dancing show Strictly Come Dancing.
*She is good friends with Lucy Speed.
*She dated Jamiroquai lead singer Jay Kay from 1998 to 2001.
*She was once engaged to nightclub boss Richard Traviss.
*Follow her on Twitter and Instagram.