Michelle Keegan is an English actress. She is best known for her portrayal of Tina McIntyre in the long-running Granada TV soap Coronation Street, and for her role as Lance Corporal Georgie Lane in the BBC drama series Our Girl. Keegan is also known for roles such as Tracy in Ordinary Lies, Tina Moore in Tina and Bobby and Erin in Brassic. For her performance in Coronation Street, she received six Inside Soap Awards, three TV Choice Awards, a TV Now Award, and seven British Soap Awards including six consecutive for Sexiest Female between 2009 and 2014. She was named FHM’s Sexiest Woman in the World in 2015. In 2018, Keegan received the Best Actress TV Choice Award for her portrayal of Lance Corporal Georgie Lane in Our Girl. Born Michelle Elizabeth Keegan on June 3, 1987 in Stockport, Greater Manchester, England, UK, to parents Michael Keegan and Jackie Turner, she has one younger brother named Andrew. Keegan attended St Patrick’s RC High School in Eccles. She then enrolled at the Manchester School of Acting. She worked at a department store before she started her acting career. On May 24, 2015, Keegan married English reality TV star Mark Wright. She was previously in a relationship with singer Max George from 2010 to 2012. 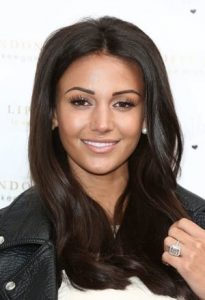