Deon Cole is an American actor and comedian. He is mainly known for his work in The Tonight Show with Conan O’Brien and Conan. He is also known for playing the role of Det. Daniel “DJ” Tanner in Angie Tribeca since 2016 and had a recurring role in the ABC sitcom Black-ish as Charlie Telphy which was changed to main role from season 4 onwards. He has been nominated twice for the Primetime Emmy Award. Born on January 9, 1972 in Chicago, Illinois, he attended Philander Smith College in Little Rock, Arkansas, USA. He started as a stand-up comedian, getting his start at clubs in the South Side of Chicago. He has one son. 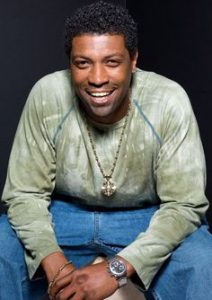 Deon Cole Facts:
*He was born and raised in Chicago, Illinois.
*He has been hosing the game show Face Value on BET since 2017.
*He has his own production company, Coled Blooded.
*He is friends with Affion Crockett, and Steve Harvey.
*Visit his official website: www.deoncole.com
*Follow him on Twitter, Facebook and Instagram.