Ryan Reynolds is a Canadian actor and filmmaker, best known for his starring role in the superhero film Deadpool. He portrayed the character of Hannibal King in the 2004 film Blade: Trinity and portrayed Wade Wilson in X-Men Origins: Wolverine (2009). He is also known for television roles as Billy Simpson in the YTV Canadian teen soap opera Fifteen and Michael Bergen on the ABC sitcom Two Guys and a Girl. Reynolds has also starred in such films as Definitely, Maybe, The Amityville Horror, Mississippi Grind, The Croods, Buried, The Proposal, The Voices, Safe House, Van Wilder, and Woman in Gold. Born Ryan Rodney Reynolds on October 23, 1976 in Vancouver, British Columbia, Canada, to Tammy and Jim Reynolds, he belongs to English and Irish descent and was raised as a Roman Catholic. He has three older brothers, Terry, Jeff and Patrick. After graduating from Kitsilano Secondary School in 1994, he attended Kwantlen Polytechnic University for a few months. He debuted as Billy Simpson in the Canadian-produced teen soap opera Fifteen. He made his film debut in the 1993 Canadian film Ordinary Magic. He has been married to actress Blake Lively since September 9, 2012. They have two daughters: James and Ines. He was previously married to actress Scarlett Johansson from 2008 to 2011. 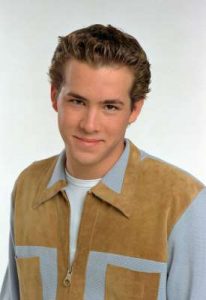 Ryan Reynolds Facts:
*The youngest of four brothers, Reynolds was born in Vancouver, British Columbia, Canada.
*He is of English and Irish descent.
*His father was a food wholesaler, and his mother worked as a retail-store saleswoman.
*He is a huge fan of American football team Green Bay Packers.
*He worked in a grocery store before becoming an actor.
*For his work in the superhero film Deadpool, he earned a Golden Globe Award nomination.
*He was named People magazine’s Sexiest Man Alive in 2010.
*He played rugby while growing up.
*He loves traveling and riding motorcycles.
*In 2004, he gained 25 pounds of muscle for his role as Hannibal King in Blade: Trinity.
*Follow him on Twitter, Facebook and Instagram.