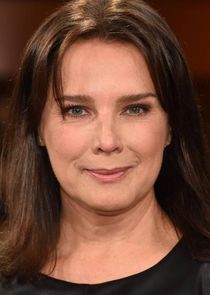 Born on January 14, 1965 in Esch-sur-Alzette, Luxembourg, to a Luxembourgish father and Italian mother, she made her debut on Radio Luxembourg at the age of 12. She began her entertainment career in her mid-teens as a member of the youth drama group Lycée Hubert Clément of Esch-sur-Alzette.

She has been married to Tom Bierbaumer since 2018. She was previously married to Harald Kloser and Mehmet Kurtuluş. In the 1980s she lived in Manhattan, and from the 1990s to 2008 in Los Angeles, California.

Désirée Nosbusch Facts:
*She was born on January 14, 1965 in Esch-sur-Alzette, Luxembourg.
*She studied at HB Studio New York under Uta Hagen, Herbert Berghof and William Hickey from 1981 to 1984.
*She was a member of the youth drama group of the Lycée Hubert Clément of Esch-sur-Alzette (Luxembourg), and appeared in some Italian-language TV miniseries.
*In 2010, she founded Deal Productions together with Alexandra Hoesdorff.
*She is fluent in Luxembourgish, German, French, Italian and English.