Diana Ross is an award winning American singer, songwriter and actress. She is best known as the lead vocalist of the popular 1960s singing group The Supremes. She has also starred in the films The Wiz, Mahogany and Lady Sings the Blues, for which she won a Golden Globe. Diana was born Diane Ernestine Earle Ross on March 26, 1944 in Detroit, Michigan, to African-American parents Ernestine Moten and Fred Ross, Sr. She was married to Arne Naess Jr. and Robert Ellis Silberstein. She has three daughters; Chudney, Rhoda and Tracee and two sons; Evan and Ross. 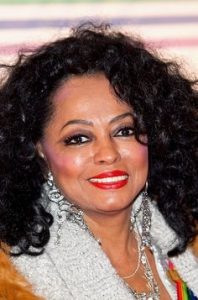 Diana Ross Facts:
*Her parents were both African-American.
*She is a 1962 graduate of Cass Technical High School.
*She won her first Grammy award in 2012.
*She was placed number 86 on VH1’s 100 Sexiest Artists in 2002.
*Follow her on Twitter, YouTube, Facebook and Myspace.