Diksha Dagar is an Indian female professional deaf golfer who is considered as one of the emerging amateur golfers in India. Turning professional in 2019, Dagar became only the second Indian female golfer after Aditi Ashok to win the Ladies European Tour and became the youngest Indian woman to do so at the age of 18. Born on December 14, 2000 in Jhajjar, India with hearing problems and started to wear hearing aids since the age of six. She started playing golf since the age of seven along with her older brother Yogesh Dagar, who is also deaf, and has been playing in age-group events. She started playing golf as a left-hander in the amateur level in 2012. 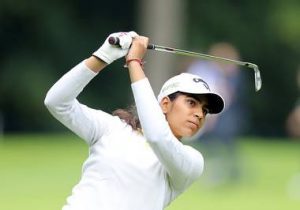 Diksha Dagar Facts:
*She was born on December 14, 2000 in Jhajjar, India.
*She enjoys playing basketball with her older brother Yogesh, who is also profoundly deaf.
*She was coached by her father Narinder, a former scratch golfer who also serves as an army personnel.
*She became #1 amateur ladies golfer in India from November 2015.
*She became the only Indian golfer to be ranked within top 500 in the world rankings for U18 category in 2016.
*She won silver at the 2017 Summer Deaflympics.
*She represented India at the 2018 Asian Games and won the 2018 Singapore Amateur title.
*She turned professional in 2019.
*She won the 2019 Ladies European Tour becoming India’s youngest woman to clinch a Ladies European Tour title at the age of 18.
*She became the first Indian to clinch the South African Women’s Open title and second Indian female overall to claim the Ladies European Tour Title.
*Follow her on Twitter and Instagram.