Dina Meyer is an American actress of film and television. She is best known for her roles in films such as Starship Troopers, Dragonheart, Johnny Mnemonic, Bats, D-Tox, Star Trek: Nemesis, and the Saw film franchise, and the television series Birds of Prey, Sequestered, Secret Agent Man, Beverly Hills, 90210, and Point Pleasant. She has also appeared as a guest-star in several television series such as Ally McBeal, The Mentalist, Six Feet Under, Nip/Tuck, Castle, NCIS, CSI: Crime Scene Investigation, and American Horror Story. Born on December 22, 1968 in Queens, New York, to a Jewish family; her Jewish grandparents were from Germany and Austria, she grew up in Dix Hills, Long Island, New York. She has a younger brother named Evan and an older brother named Gregory. Meyer graduated in 1991 from Long Island University with a Bachelor’s degree in Business Administration; minor in French, and trained in acting for three years, with Ron Stetson, at the Neighborhood Playhouse School of the Theatre in New York. 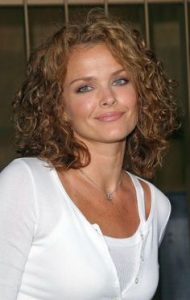 Dina Meyer Facts:
*She was born on December 22, 1968 in Queens, New York, USA.
*She modeled from ages 9 to 16.
*She made her film debut in the TV movie Strapped (1993).
*She played Detective Allison Kerry in the Saw film franchise.
*Her hobbies include snowboarding, rollerblading and other outdoor activities.
*Visit her official website: www.dinameyer.com
*Follow her on Twitter, Facebook and Instagram.