Benoît Paire is a French professional tennis player who achieved a career-high singles ranking of World No. 18 on January 11, 2016. Turning professional in 2007, Paire has won three singles titles, at the 2015 Swedish Open, the 2019 Marrakesh Open and the 2019 Lyon Open. His best result in a Grand Slam has been reaching in the fourth round on four occasions. 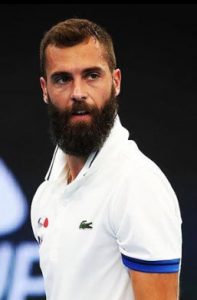