German former professional basketball player and front office executive who currently serves as a special advisor for the Dallas Mavericks of the National Basketball Association (NBA). He is widely regarded as one of the greatest power forwards of all time and is considered by many to be the greatest European player of all time. Nowitzki played for the Dallas Mavericks in the United States’ National Basketball Association’s. He won the NBA Most Valuable Player Award in 2007 and the NBA Finals Most Valuable Player Award in 2011. He is a 14-time All-Star, a 12-time All-NBA Team member, the first European player to start in an All-Star Game, and the first European player to receive the NBA Most Valuable Player Award. Nowitzki is the highest-scoring foreign-born player in NBA history. In international play, Nowitzki led the German national basketball team to a bronze medal in the 2002 FIBA World Championship and silver in EuroBasket 2005, and was the leading scorer and MVP in both tournaments. 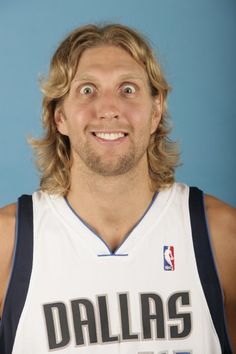 Dirk Nowitzki Facts:
*He was born on June 19, 1978 in Würzburg, Germany.
*He started playing in the NBA in 1998.
*He was chosen as the ninth pick in the 1998 NBA draft by the Milwaukee Bucks.
*He was named Germany’s Player of the Year for 1998 by Basket magazine.
*He signed a six year deal with the Dallas Mavericks for $90 million in 2001.
*He was named MVP of the 2002 World Basketball Championships.
*He won the 2006-07 NBA Most Valuable Player (MVP) Award.
*He is the first Maverick voted onto an All-NBA Team and holds several all-time Mavericks franchise records.
*He became the first non-American player to receive the Naismith Legacy Award on December 10, 2012.
*He retired from the NBA at the end of the 2018-2019 season, having played his entire career with the Dallas Mavericks.
*He married Jessica Olsson in 2012 and they have three children named Morris, Malaika and Max.
*He enjoys reading and playing the saxophone and the guitar in his spare time.
*He is good friends with basketball player Steve Nash.