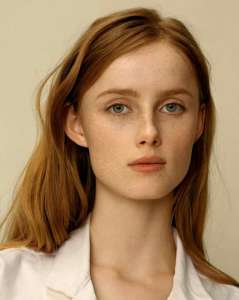 Rianne van Rompaey Facts:
*She was born on January 3, 1996 in Hoofddorp, Netherlands.
*She was discovered after she sent some of her pictures to Paparazzi Models.
*Her first photoshoot was for the January 2013 and February 2013 issues of Elle Netherlands.
*She made her modeling debut at Louis Vuitton’s AW14 fashion show in 2014.
*She appeared in the February 2016 issue of W magazine.
*Her beauty has been described as pre-Raphaelite.
*She moved to Amsterdam within Netherlands on November 17, 2015.
*She speaks English, French, and Dutch fluently.
*Follow her on Instagram.