American rapper, songwriter and actor who is one of the best-selling hip hop artists of all time. His best-selling album, … And Then There Was X (1999), was certified 5x Multi-Platinum by the RIAA and was nominated for Best Rap Album at the 2001 Grammys. The album debuted at No. 1 on the Billboard 200 chart, making DMX the only rapper to reach number one with his first three albums. The album’s second single “Party Up (Up in Here)” became his most successful single of his career peaking at number 27 on the Hot 100. His fifth album, “Grand Champ” (2003), debuted at number one on the Billboard 200. In 2000, DMX founded Bloodline Records in New York City. Outside music, he has had roles in the films such as Belly, Romeo Must Die, Exit Wounds, Cradle 2 the Grave and Last Hour. Born Earl Simmons on December 18, 1970 in Mount Vernon, New York, to parents Arnett Simmons and Joe Barker, he grew up in Yonkers, New York. He graduated from Yonkers High School, Yonkers. DMX was married to Tashera Simmons from 1999 to 2014. He is the father of fifteen children. 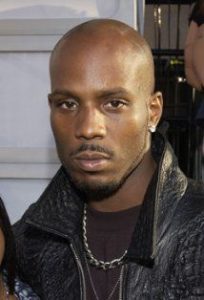 DMX Facts:
*Born on December 18, 1970 in Mount Vernon, New York, he was brought up in the Jehovah’s Witness faith.
*He began his career as a beatboxer in the late 80’s.
*He released his debut studio album, It’s Dark and Hell Is Hot in 1998.
*He is the founder and owner of Bloodline Records.
*He has his own clothing line called Bloodline.
*He published his book E.A.R.L.: The Autobiography of DMX in 2003.
*He has tattoo on his back of his dog killed by a motorist and the words ONE LOVE BOOMER.
*He has 9 dogs.
*Visit his official website: www.theofficialdmx.com
*Follow him on Twitter, YouTube, Facebook and Instagram.