American singer-songwriter who is widely considered to be one of the greatest songwriters in the history of popular music. Throughout his career, Dylan has won many awards throughout his career including the 2016 Nobel Prize in Literature, ten Grammy Awards, one Academy Award and one Golden Globe Award. He has been inducted into the Rock and Roll Hall of Fame, Nashville Songwriters Hall of Fame, and Songwriters Hall of Fame. In May 2000, Dylan received the Polar Music Prize from Sweden’s King Carl XVI. Dylan’s songs “Blowin’ in the Wind” and “The Times They Are a-Changin'” became anthems for the civil rights and anti-war movements. 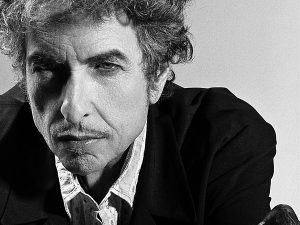 Bob Dylan Facts:
*He was born on May 24, 1941 in Duluth, Minnesota, USA.
*As a youth he was a big fan of rock and roll, and formed several bands in high school.
*He graduated from Hibbing High School in 1959.
*He dropped out of college in 1960 and moved to New York.
*His professional career began in 1961 when he signed with Columbia Records.
*He first achieved fame as a folk musician.
*He released his debut studio album, Bob Dylan in 1962.
*He changed his name to Dylan after the poet Dylan Thomas.
*He supported Barack Obama in the 2008 presidential election.
*He was voted the seventh greatest singer of the rock era in a Rolling Stone magazine poll in 2008.
*He won a Nobel Prize for Literature in 2016.
*He is a big fan of the films of John Ford.
*Some of his biggest influences are Ferdinand ‘Jelly Roll’ Morton, Leadbelly, Mance Lipscomb, Hank Williams, Muddy Waters, Big Joe Williams and Woody Guthrie.
*Visit his official website: www.bobdylan.com
*Follow him on Twitter, YouTube, Facebook and Instagram.