Doja Cat is an American singer, rapper, songwriter, and record producer. She signed a recording contract with RCA Records in 2014 and released her debut EP Purrr! in August 2014, and a series of singles, including “Go To Town”, “So High” and “Tia Tamera”. Her 2018 single “Mooo!”, quickly became a viral music video on YouTube. Born Amalaratna Zandile Dlamini on October 21, 1995 in Malibu, California, her father, Dumisani Dlamini, is a South African actor, film producer, and composer while her mother, Deborah Elizabeth Sawyer, is a painter. She released her first song “So High” on the streaming platform SoundCloud in 2013. 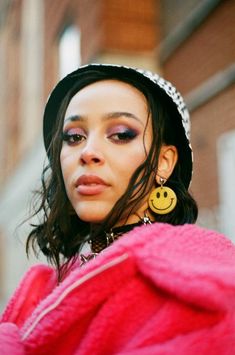 Doja Cat Facts:
*She was born on October 21, 1995 in Malibu, California, USA.
*Growing up, she studied piano and danced.
*She released her debut extended play, Purrr! in August 2014.
*She released her debut studio album, Amala, in 2018.
*Her stage name comes from the slang word of “dojo,” which means weed, along with her love for cats.
*Erykah Badu, Pharrell, Jamiroquai, PartyNextDoor, and Drake are her musical inspirations.
*Visit her official website: www.dojacat.com
*Follow her on Twitter, YouTube, SoundCloud, Facebook and Instagram.