Danna Paola is a Mexican actress, singer and model. She is best known for starring in such telenovelas as María Belén, Amy, la niña de la mochila azul, Pablo y Andrea, Atrévete a soñar, ¿Quién es quién?, La Doña, José José, and el príncipe de la canción. Her theater credits include Anita la huerfanita, Wicked and Hoy no me puedo levantar. She also starred in the Netflix series Élite, playing the role of Lucrecia “Lu” Montesinos Hendrich. As a singer, she’s released popular albums such as Mi Globo Azul (2001), Danna Paola (2012), and Sie7e (2019). Paola has won 87 awards out of 122 nominations. Born Danna Paola Rivera Munguía on June 23, 1995 in Mexico City, Mexico, to parents Patricia Munguía and Juan José Rivera Arellano, she has an older sister named Vania. Danna’s acting career started in 1999 when at age four she and her sister attended Televisa’s casting call in Mexico City for Plaza Sésamo, the Mexican version of the iconic American TV show Sesame Street. At the age of five, Paola was cast in the telenovela, Rayito de Luz, in 2000. One year later at age 6, she released her debut album, titled Mi Globo Azul. 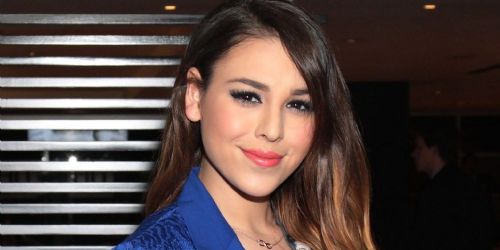 Danna Paola Education:
She was homeschooled.

Danna Paola Facts:
*She was born on June 23, 1995 in Mexico City, Distrito Federal, Mexico.
*Her father was a member of the 1980s Mexican band Grupo Ciclon.
*Her parents split when she was very small, and she was raised by her mother.
*She began acting in 1999 at the age of four.
*She released her debut album, titled Mi Globo Azul at the age of six.
*She hosted the Nickelodeon Mexico Kids’ Choice Awards in 2011.
*She starred in the theatrical production Wicked from 2013 to 2015.
*She has flower tattoo on her left arm.
*Visit her official website: www.dannapaolaonline.com
*Follow her on Twitter, YouTube, Facebook and Instagram.