Dolly Shahine is a former singer, actress, and fashion designer from Bmahray, Lebanon who announced her retirement from the entertainment industry in 2016. Her single hits include Nazra Wahda, Ayezny Alok, Gher Kol El Banat, Dawebny Fik, Ana Zay Ay Bent, and Momo Einy’. As an actress, she is known for her roles in the films Tatah, Bidoun Riqaba, El Mesh Muhandes Hassan, Nems Bond, Al Shayateen, and Weja. Dolly was born as Dolly Joseph Abou Shahine in Bmahray, Aley District, Lebanon to a Catholic family. She is the daughter of Lebanese father and a Brazilian mother. She was named after the American country singer Dolly Parton. She married Lebanese director Bakhos Alwan in 2009, and the couple had a daughter named Noor before getting separated in 2014. She was previously married to Lebanese businessman Sami Qalib from 2001 to 2008. 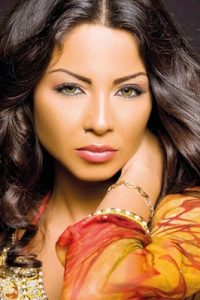